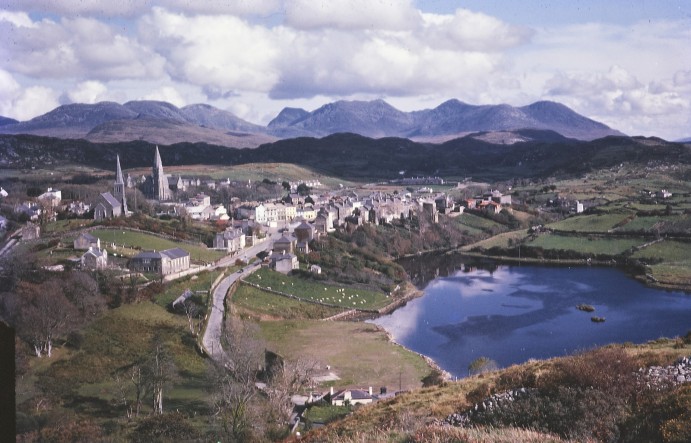 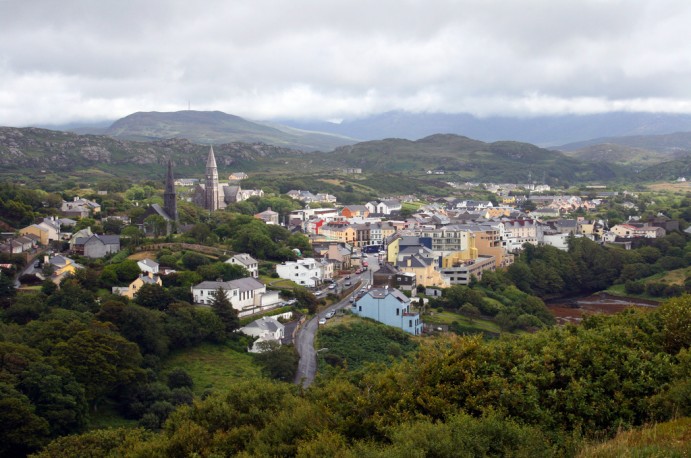 Some places really don’t change that much at all, or so it seems until you look a bit closer.

Visitors often comment on the brightly coloured facades of shops and houses in Irish towns, and assume it is traditional. It really isn’t, or at least it’s a pretty new tradition. If you look at Clifden in 1960, most buildings were grey or white -and the town was almost monochrome.

It was a duller time in Ireland generally. The country was poor, depressed and hadn’t really gained the confidence needed to paint a building canary yellow or powder blue.

The town has grown a bit in the years between the two images, trees have matured and it looks like lots more of them have been planted, even allowing for the fact that the two images were taken in different seasons.

Life in towns like Clifden have changed in those years too. In the 1960s Clifden would have been a fairly typical market town, a commercial and retail center for the surrounding area with its main street populated by shops selling groceries, clothes, hardware, animal feeds etc. While there were tourists, that trade was seasonal and catered to in a more low key way. There were few restaurants, probably one or two souvenir shops.

Now Clifden, like other towns, has supermarkets out of the town centre, more people have cars and do much of their shopping in Galway. There is much more reliance on tourism for the life of the town centre, restaurants and cafes, craft and souvenir shops and other businesses catering to the tourist market predominate in the main streets.

Ireland & the IrishIreland Then & Now Galway

Have you something to add about "Clifden: Not changed at all?"?