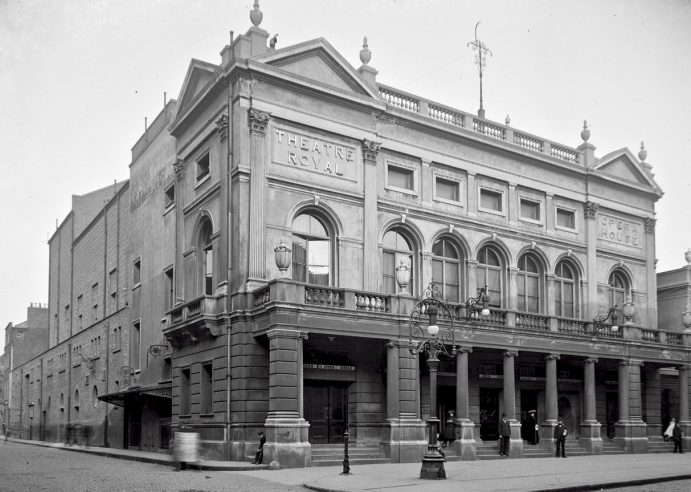 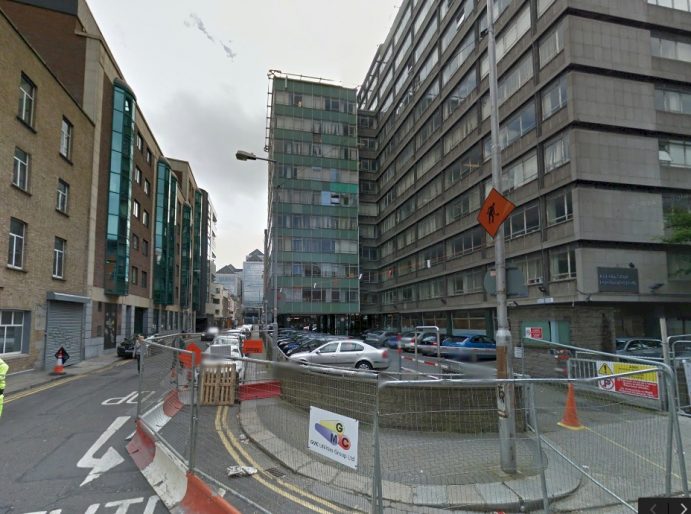 If there was ever a place that ‘progress’ did nothing to improve, it has to be Hawkins St, and in particular the site of the lamented Theatre Royal in Dublin. Situated in the heart of the city, just south of the River Liffey, the Theatre Royal, in several different iterations, was for almost 150 years at the centre of Dublin cultural life.

The first Theatre Royal was built in Hawkins St (there was an earlier version in Smock Alley) in 1822 and was initially intended as a venue for ‘spoken drama’ though later staged both theatrical and musical events with famous performances from legendary 19th century luminaries as such as Paginini, Jenny Lind and Barry Sullivan.

It was a popular venue, though with the regular financial problems, temporary closures and changes of management that would remain a feature of its later history, and survived until destroyed by fire in 1880.

In 1897 a new and larger Theatre Royal, with seating for over 2000 people, opened to much fanfare, in a fine building designed by Frank Matchem, a renowned theatre architect who also designed the London Palladium. At first it mostly staged opera and musical comedies, then reliable crowd pleasers, later diversifying into music hall or variety shows as these became more popular. Charlie Chaplin was among the famous names who appeared on stage, though it was early in his career and he was well down the bill.

As the motion picture became the new crowd puller in the early 20th century, the theatre increasingly became a cinema, though often combining a movie screening  with live performance.  It was not really suitable as a cinema however, was not profitable, and it was clear that time was running out for venues that could not accommodate to this new form of entertainment.

In 1934 the building was demolished and replaced with a larger art deco style building, with an even larger capacity of well over 3500. While much better than what would come later, I am not convinced that this was an improvement to the streetscape over its predecessor, though there are many who loved it and this isn’t the greatest image. 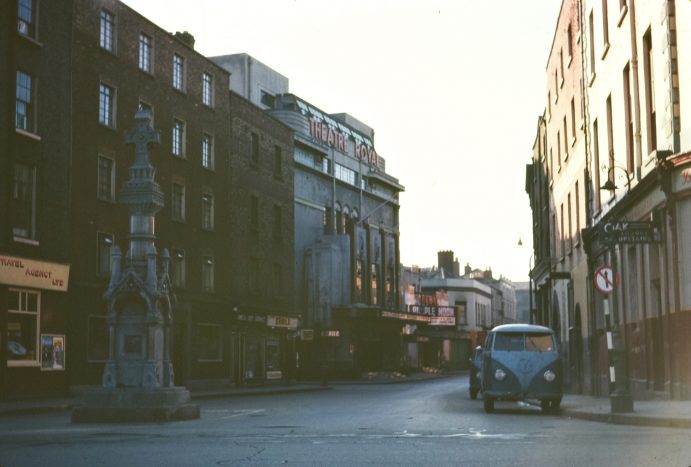 This was a theatre not short of ambition, designed to accommodate both cinema and theatre, with a resident orchestra and dancing troop, known as the Royelettes, as well as a large restaurant, this was hailed as a theatre of the future, providing for Dublin a place when a wide variety of entertainments could be offered under one roof.

Its size allowed it to book big name acts – George Formby, Max Miller, Gracie Fields and most famously Judy Garland – who had not previously been seen in Dublin and which packed the house. In between these big events, regular variety, comedy and musical shows, with big name Irish acts and often combined as before with movies, where initially popular if less likely to attract capacity crowds.

In spite of having a special place in the heart of Dubliners, whose older residents still regard it with extreme fondness, it was difficult to make such a large venue work financially and it was not profitable even at the start. The arrival of television – allowing people to be entertained at home – compounded by the inexorable rise of movies as popular entertainment made live theatre venues increasingly difficult to fill. By June 1962 it had reached a point where closure was inevitable and the Theatre Royal brought down the curtain for good.

Shortly afterwards the reviled Hawkins House was built on the site. It has been repeatedly voted the ugliest building in Dublin – there are people who avoid walking down Hawkins St just do they don’t have to look at this frankly depressing edifice.

It embodies everything that is bad about 1960s architecture and none of the good. Aside from looking awful is an unhealthy building, poorly insulated and constructed and with a little talked about but widely accepted problem with asbestos, which will likely come to the fore when it is eventually, inevitably, demolished. Ironically, it is occupied by offices of Ireland’s Department of Health.

Plans for its replacement were overtaken by the death of the Celtic Tiger, but as of 2016 are again on the agenda. It really cannot happen soon enough.

Have you something to add about "Hawkins St and the Theatre Royal"?