Home » What to do » Swimming, Surfing & Boats » Beaches in Co Wicklow 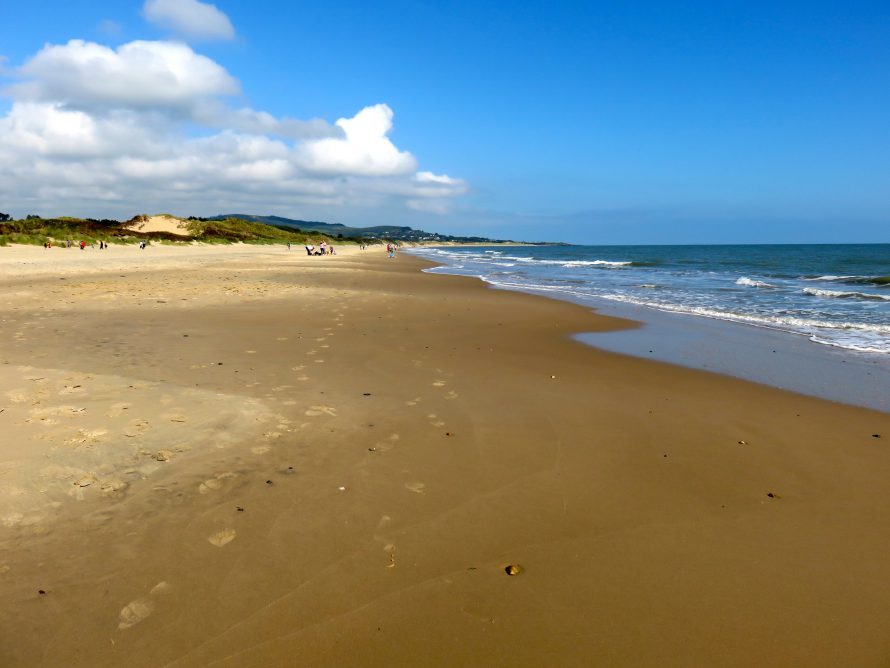 With easy access from Dublin, Wicklow’s beaches have long been a popular escape from the city, especially when temperatures soar. Strung along the eastern coast of the Irish sea, they may be less dramatic than the Atlantic beaches of the west of Ireland, but offer long stretches of good sandy beach, lots of opportunities for water sports and and some truly fine shore angling.

While some can become quite crowded on a sunny day, there are often smaller almost deserted beaches close by, where those looking to avoid the throngs can escape.

5km long beach with powdery sand and lots of dunes, which on a sunny day is a rival for any Mediterranean beach. Very popular with Dubliners, both for day trips and as a place to have a holiday home. The latter are considered prestigious – even berths for caravans or mobile holiday homes make an eye-watering price.

There is a local surf school where gear can be hired or lessons arranged, and while it’s not among the best surfing beaches in the country there can be good waves when the wind is right.

Lifeguards are on duty throughout the summer. The image at the top of the page is of Brittas Bay.

Stony beach in the heart of Wicklow’s main town of Bray – you’ll need some kind of footwear to get comfortably to the sea or go south for the least stony parts. Nonetheless it’s popular in the summer. Bray was once a holiday resort town, but is less so now. Still, there are games arcades, ice cream shops and fish and chips shops to retire to after your swim.

A mix of sand and shingle – especially when the tide is out – there are not many amenities locally but it’s close to Arklow, a decent town. A good place to swim and there is also decent fishing for bass, dogfish and codling from a rocky promontory that pushes out into the sea.

About a half mile of mixed sand and shingle, becoming much more stony as it meets the north beach. It is close to the Greystones Dart station, making it easily accessible from Dublin. There are lifeguards on duty throughout the summer.

There is a large newly developed marina nearby, which has several cafes and restaurants. Used to be popular with surfers, but the marina development all but killed the waves. To be honest it’s not the most attractive beach and you would be better heading further south to Silver Strand.

A small, pretty and sandy beach in a sheltered cove, this is one of the nicest beaches on the East coast. There is a catch though – it is accessibly only through a private campsite and they charge for access and parking. This does mean its a bit less crowded in high summer, but it seems wrong to pay to get onto a beach.

Even with that there is a bit of a hike from the car to the beach, so lugging down chairs etc can be a pain.

A Guide to Touring Ireland with Kids

Children are welcomed almost everywhere in Ireland, but touring anywhere as a …

Have you something to add about "Beaches in Co Wicklow"?