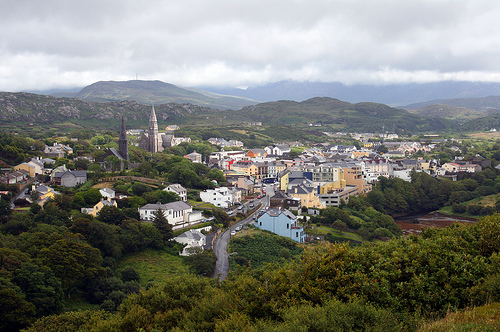 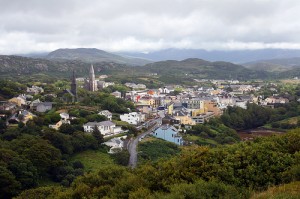 Clifden, from the Sky road, by BK59

Connemara is an area of rugged landscape, wide vistas, bogs, valleys and mountains which is known and loved by artists and photographers for its clear light and unspoilt beauty.

It is also very popular with tourists and the narrow roads can at times be very crowded with cars, tour buses, cyclists and walkers. However we take some routes here that are tricky for coaches so should avoid them as much as possible.

This tour will take a full day by car, allow about 8 hours, but even the time spent in the car is worthwhile and enjoyable because of the beautiful scenery you will pass.

It could also be followed as a cycling tour also, although obviously it will take considerably more than one day! There are some fairly stiff climbs along the route, but all are rewarding enough to make them well worthwhile.

It starts and ends in Galway city (A)

Take a short detour off the main Oughterard road to visit Aughanure Castle. 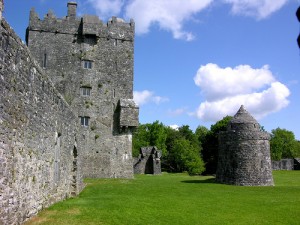 The castle was built in the 15th Century by the “ferocious O’Flaherties”, rulers of most of West Connaught, on a rocky ‘island’ formed by the Drimneen River, which separates into two branches then reunites at the other side of the castle before flowing into Lough Corrib.

Ownership came and went from the O’Flaherty clan over the centuries, sometimes as result of infighting, sometimes because it was taken by the English or those loyal to them and on one occasion due to foreclosure on a mortgage.

Finally it was the prohibutive cost of maintaining such a building that brought their occupation to an end after 500 years. The government acquired the castle in 1952 from Peter O’Flaherty and declared it a National Monument.

Although tower houses are common in Ireland, this is probably the best and most intact example in the country. It has been well restored and gives a particularly good insight into how life was lived by a powerful land owning family. Tours are available and entry is free to holders of  a heritage card. 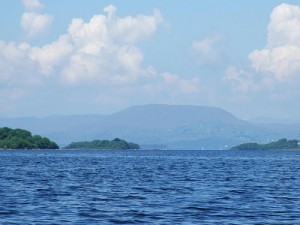 Oughterard is a small town, pretty but quite touristy and often very crowded in high season.

You’ll have seen Lough Corrib by now, the largest lake in the Republic of Ireland. Dotted with tiny islands, reputedly one for every day of the year, it was once a great fishing lake but has been mired in controversy of late.

The lake is the primary source of drinking water for Galway city, and the discovery of cryptoporidia in the water left most of the city dependant on bottled water for several weeks in 2007. Local fishermen who had for years been warning about continued deterioration in water quality were perfectly justified in saying ‘I told you so’.

Nonetheless it’s a beautiful place, and the views around and from the lake are spectacular. If you have time return another day and take a trip from the pier at Oughterard to Inchagoill Island, where there is an early monastic settlement, or one of the other islands. it’s a very peaceful and serene way to spend some time.

Glengowla Mines is an historic 19th century silver mine which is also rich in other minerals, including marble, dolomite, quartz, calcite, barite, sphalerite, chalcopyrite and very rare blue/green fluorite, so that in parts the walls seem to twinkle. 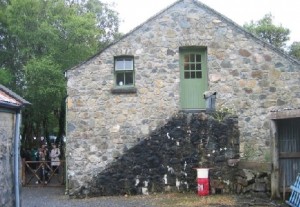 The mine closed in 1865 after only 14 years of operation. As well as the old shafts, the powder magazine, blacksmith’s workshop and the agent’s cottage have been restored and contain items rescued from the mine.

Kids particularly enjoy the chance to pan for treasure here, especially when they discover that whatever they get they keep – you never know!

On the same site there is a bog where  you can have a go at cutting turf the old fashioned way. It will leave you glad that you don’t rely on it for fuel, it’s very hard work indeed. Although it can be a bit crowded with tour groups at times, a visit here is highly recommended

At Maam Cross you are right in the heart of the beautiful Maamturk Mountains, which you will have seen unfolding as you drove from Oughterard.

This was once a wild and desolate place, but is now tending towards over development and is, in our opinion, not worth lingering in.

If you have any movie buffs among you, a quick visit to the bridge and the replica of the cottage used in the 1950s John Wayne and Maureen O’Hara film “The Quiet Man”, which was filmed locally, may be in order. 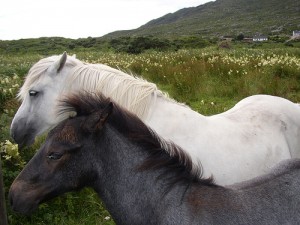 Clifden is the capital of Connemara and a good place to shop for gifts or just stop for lunch.

If you happen to be there in late August, you may be lucky enough to catch the annual Connemara Pony Show, where the best of these native Irish ponies will be on display. At all times of year you are likely to come across ponies grazing on the hills in the area.

The Sky Road is an exhilarating drive to the west of Clifden, from which the photograph of the town at the top of the page was taken. 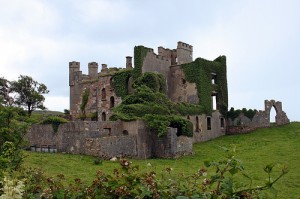 About a mile from Clifden is a gateway leading to the romantic ruins of Clifden Castle. Getting to them involves a ten minute walk down a fairly rough and steep track.

More a Gothic mansion than a true castle, this was the home of local landlords the d’Arcys who lived there until 1850 when the castle was sold to the Eyre family before falling into ruin in the early 20th century.

A little further along, the Sky Road forks – to the left you can take the low road by the sea, but the high road is the better route to take on the outward trip for the breathtaking views of the islands (Inishturk and Turbot) and the surrounding coastline. 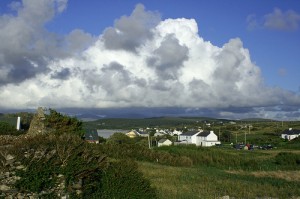 Getting to Cleggan is a short detour that you could omit if time is short, though for some people it will be a must.

It’s a pretty fishing village, although now largely dependant on tourism, from where you can catch a ferry to Inisboffin.

But the real draw is the beautiful beaches just along the shore from the village itself. If you can’t stand crowded beaches, these are for you.  Nothing makes you feel more alive than a swim in the Atlantic!

There is a very good riding centre in Cleggan, and if horseriding is your thing and you want to create a truly special memory, then cantering along a near empty beach on a Connemara pony, while looking out to Inishboffin Ireland should do the trick! 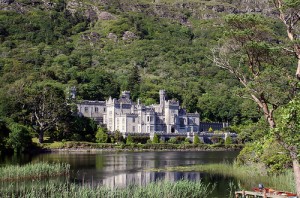 On the way to Kylemore you will pass through Letterfrack where the Visitor Centre for Connemara National Park is located. Its worth a short visit if you have time and is free to holders of a Heritage Card.

Kylemore Abbey was built in a castellated style in the 1860s by Mitchell Henry as a gift for his wife (gift hint for husbands!) and is now a select private boarding school for girls.

Visitors are not permitted in the main building but can visit the gothic Chapel, the restored walled gardens and the lovely lakeside walks. A very nice café serves excellent afternoon tea with most of the fare cooked on the premises by the nuns and their helpers.

It has to rank high among the most photographed sights in Ireland! 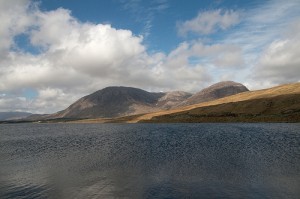 The Inagh Valley, by aleske

As you start climbing the hills after leaving Kylemore, be sure to pull in and look back.

The drive through the Inagh Valley (I), is truly spectacular, particularly in the early evening light which will be settling in over the mountains by now.

Take your time, stop often – this is definitely a place to slow down, linger and enjoy the world around you.

The final leg of journey takes you along the coast of Galway Bay, though a series of small villages some of which have sadly been spoiled by unsympathetic modern development. However the area here is among the most popular for wealthy Irish people to keep holiday homes, and just looking at some of the places they have built or restored is entertaining in itself.

Rossaveel (K) is a small harbour village from where regular ferries leave for the Aran Islands, which are visible from the shoreline. The Islands are a day trip (or more) in themselves, but if you have an additional day available it is a trip well worth making.

You are now in the heart of the Connemara Gealtacht, an area of Ireland where Irish is still the first language. Generations of Irish school children have come here for a week or two during their Summer break to learn the language, me included, although sadly it was something of a futile exercise and my Irish is rudimentary at best.

Its also vaguely the area where a popular Irish language soap opera, Ros na Run,  is set. This trailer for the show will let you hear the language – and decide what you think of Irish soap opera maybe!

Spiddal (L) is a very small village with lovely views over Galway Bay and the Aran Islands.

The area is renowned for its traditional music, with local musicians playing in the pubs nightly during peak tourist season and weekend nights at other times. Consider stopping here for dinner and an evening of music and ‘craic’ [which broadly means fun] before returning to Galway.

How big is the bed? US vs Irish bed sizes

A Guide to Touring Ireland with Kids

Children are welcomed almost everywhere in Ireland, but touring anywhere as a …