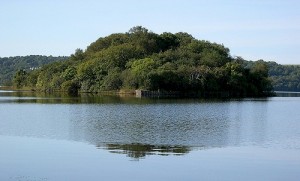 The Isle of Inisfree by Jason Sturner 72

There can hardly be a more romantic poet than William Butler Yeats, and this is the area where he grew up, to which he returned often and where he is buried.

It is a place of forests, rivers and lakes, with a coastline that varies from long sandy beaches to high limestone ridges.

Ben Bulben, in the main image above, dominates in the north, while in the south there is Lough Gill, above, with in its centre the lake Isle of Inisfree, subject of one of Yeats’ most famous poems.

See also: Thoor Ballylee, the tower house or small castle in Galway where Yeats lived with his family. 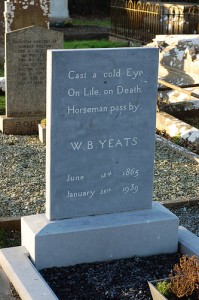 The area is best known for its connections with WB Yeats who is buried in Drumcliffe cemetery, his grave bearing the epitaph:

“Cast a cold eye on Life, on Death. Horseman pass by“.

Yeats was a frequent visitor to Lissadell house, birthplace and home of Constance Gore Booth, later Countess Markievicz, who was the first woman to be elected to Westminster Parliament.

The house was until recently open to the public occasionally and the grounds all year round, however a dispute over rights of way though the estate have now led to its closure, which is a huge loss to the area and to visitors.

Yeats wrote many romantic poems, but among the most affecting is this one, “Cloths of Heaven”

Had I the heavens’ embroidered cloths,
Enwrought with golden and silver light,
The blue and the dim and the dark cloths
Of night and light and the half-light,
I would spread the cloths under your feet;
But I, being poor, have only my dreams;
I have spread my dreams under your feet;
Tread softly for you tread on my dreams. 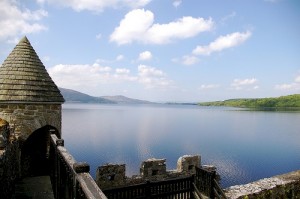 The cemetary at Drumcliffe is an obvious stop and  there is a small round tour just accross the road.

Glencar Lake, close by, is worth a visit, particularly to see the beautiful waterfall which feeds it. It is also a great place for birdwatching.

Parke’s Castle is a 17th century fortified manor house with lovely views over Lough Gill. Entrance is free with a heritage card.

There is a small harbour nearby from where you can catch a boat for a cruise on the lake and a visit to the Lake Isle of Inisfree, which is the place of which Yeats wrote:

“And I shall have some peace there, For peace comes dropping slow, Dropping from the veils of the morning To where the cricket sings; ”

On the far side of Lough Gill, at Dooney Rock there are magnificent views over the lake to Ben Bulben. This is the perfect spot for a picnic, with woodland walks behind you and the countryside spread out before you.

Where to Stay & Eat

The Cottage, near Mullaghmore, is incredibly pretty, an idyllic and beautifully restored thatched cottage with flowers in the garden and open fires inside.

Temple House is a large and elegant country house near Lough Gill, with huge bedrooms and good food.

Eithna’s Restaurant (071 916 6407) by the harbour in Mullaghmore specialises in local seafood and is very good indeed.

Yeats’ Tavern Restaurant & Davis’s Pub in Drumcliffe is a good lunchtime spot. Also in Drumcliffe, near the grave site, is a small teahouse with better than average home-made snacks, cakes and sandwiches.

Dundalk is not just an interesting town to visit, its a great base for touring …