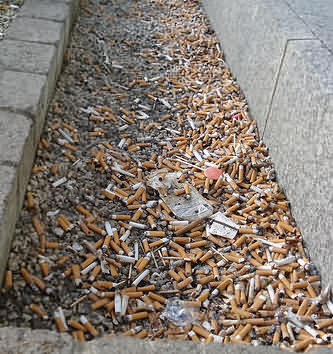 It’s over four years now since Ireland’s pubs changed forever with the introduction of the ban on smoking in enclosed public spaces.

The dust has settled here on all the predictable brouhaha about civil liberties and freedom of choice now and you would be pretty hard put to find anyone who would support a lifting of that ban. That isn’t to say it has not changed the nature of an Irish night out somewhat.

There is a trend towards drinking more at home and less in pubs – off license sales are up, pub sales down – but it’s too easy to blame that on the smoking ban. When a bottle of Bud costs upwards of €5 in a pub and can be had for about €1.60 from a supermarket, it’s easy to see the attraction of a night in.

Little knots of people outside the pub or office getting their fix has become a ubiquitous sight, as have ‘beer gardens’, often little more than a patch of concrete with some tables and a slew of ashtrays, which in defiance of the realities of Irish weather have sprung up like mushrooms.

This outdoor smoking has, in some places, caused quite disgusting accumulations of discarded butts, though the one above is worse than any I’ve personally seen.

Pubs used to be wreathed in a fug of tobacco smoke such that the walls were brown, the far end of the bar a cloudy shadow and patrons could be readily detected by scent alone the next day. All gone and good riddance.

Mind you there have been unexpected outcomes. When all pubs smelled of was smoke it concealed other unsavoury whiffs. Now a crowded pub late at night is heavy with the scent of, well, sweaty people. It reminds me of the comment of one Dubliner on visiting the annual Horse Show in Dublin, an occasion when rural Ireland comes en masse to the capital – “Ah, the roar of the horses, the smell of the crowd”.

Ireland in the same way as a tourist.

Sometimes you want a special meal, great food, wonderful ambiance, all the trimmings.

The Irish newspapers are full of doom and gloom about the tourism industry today.