Ireland’s roads are no longer the quiet deserted ones that previous visitors to Ireland may have experienced.

The number of cars has stretched the road system to its limit, and while in some places new motorways [freeways] and bypasses have been built to lessen the strain, in others there can be serious over-crowding.

You will still find many pleasantly quiet roads in rural areas, but when visiting larger towns and cities, be prepared for heavy and slow moving traffic and make your plans accordingly.

Driving Safely on the Left

The most important thing for visitors driving in Ireland to remember is that we drive on the left. This is not as hard to get used to as many people anticipate, after all everyone else is doing it too! Most problems that arise do so either at junctions, when it is easy to momentarily forget and go to the right, or on narrow uncrowded roads where it is easy to drift to the right.

While getting used to driving on the left be especially cautious at roundabouts [traffic circles], particularly the mini roundabouts which are springing up at a great rate on the approach roads to many cities and towns.

Roundabouts as we use them are not common in the US, so visitors from there have particular problems. We have a page about negotiating roundabouts in Ireland which you may wish to print and bring with you to help on the first day or so.

While in some countries, including the USA, the general rule is that you can make a right turn at a red light provided the road is clear, the equivalent is not the case in Ireland. You cannot turn left on a red light, ever.

Many secondary roads in Ireland are quite narrow. It is especially easy when turning onto or off narrow roads to veer accidentally to the wrong side of the road, especially when turning right.  Make it a habit to pause at junctions before you make a turn and think for a moment about where you want to end up on the new road.

Be specially vigilant on quiet roads close to tourist areas – it is not all that unusual (but is very alarming) to round a bend to find a tourist has drifted to their “usual” side of the road and is thus heading straight at you. Similarly take particular care on all roads close to ports and airports where you are most likely to meet those who have just picked up their hire car and are not yet in the swing of things.

The fact that we drive on the left can present hazards for passengers, as well as drivers, who are accustomed to right hand driving. When you exit a car on the right side for example, you would expect to land on a footpath [sidewalk] but may instead be stepping into the middle of the road – so take care.

The same applies for pedestrians –  when you are crossing a road, look right first – that is the side that traffic will be approaching from. It’s very easy, and very dangerous,  to look left instead and assume, wrongly, that the way is clear. 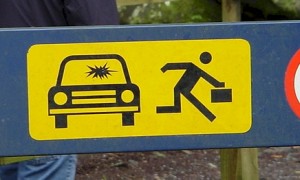 There is no doubt that hire cars, which are relatively easy to identify, can be a target for theives. It is also important when parking that you are able to come and go from your car in safety.

With this in mind, the following points are important.

Safety in the City

Like any large city, Dublin has its problems with crime and additional measures are wise when driving there. The same applies for other cities also.

Be generally sensible – if an area looks a bit run down and is populated by dodgy looking characters, it is perhaps better not to stay too long. In spite of the obviousness of this it is not uncommon to hear of reports of tourists robbed while strolling or parking on “Worstintown St”. With the greatest respect one has to ask what on earth made them think that a really seedy run-down area was the perfect place to linger and soak up the atmosphere.

American visitors can be confused by some of the motoring terms used in Ireland – it’s pretty important to know some of these, especially if you get into any bother.

Remember this: In an emergency dial 999 it’s the same as dialing 911 in the USA

Money & Banking / Preparing for your Trip

Handling Payments and Cash While in Ireland

Rain can come suddenly in Ireland, but it is not always a bad thing.