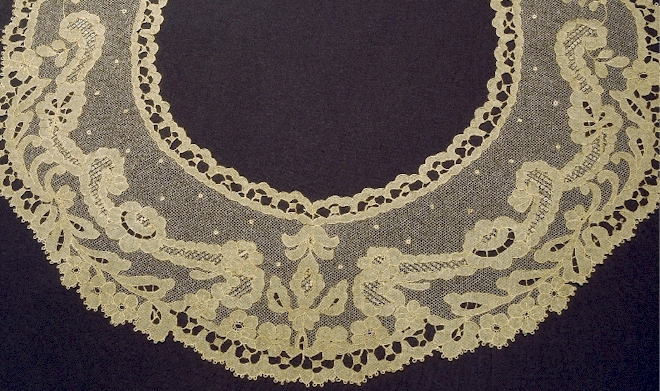 Lace is undoubtedly a luxury item but it was first made in Ireland as a direct result of poverty. During and after the famine years, in the mid 19th century, training centres were set up as a means of charitable assistance to the impoverished Irish population.

Some were started by Church of Ireland clergy or their wives, others by philanthropic landowners and quite a few by Catholic convents.

Initially all of these places took a lace making style from elsewhere in Europe and taught it to local women and girls but gradually the Irish styles forked away from the original ones and distinctive methods of working evolved in each locality.

Irish lace gained an international reputation for the fineness of the needlework and the intricacy of the designs used and lace making flourished in many places until late in the 19th century.

After that it rapidly declined, chiefly because Ireland, then quite a backward place where the industrial revolution made little impact, was unable to compete with readily available and much cheaper machine-made lace.

By the mid 20th century the craft of lace making had largely died out and the traditional skills were kept alive by just a few enthusiasts in each area.

There has recently been a revival of interest in lace making and there are now many people doing beautiful work in both the traditional style and contemporary version of old styles. It is still a slow, painstaking process to create lace by hand, so lace is not something you will find in most gift shops but it is well worth seeking out.

There are just a few lace makers left today creating lace in these traditional Irish styles. Their work is sought after, but is definitely not a bargain buy – the work is slow, painstaking and skilled, and prices are hight. It is sometimes possible to find antique lace still, though it is increasingly rare and correspondingly increasingly valuable.

This style of lace making is very distinctively Irish, with patterns, usually of flowers and leaves, built up in layers resulting in a three dimensional effect. Entire items of clothing, such as christening robes and wedding dresses were made in this way.

The origins of this style of lace is unclear but it was probably brought to Ireland by nuns who had learned similar techniques in France. Quite often the pieces were made by more than one person, with someone expert in, say, creating roses doing just that and another creating leaves and so on. Finally someone would take all the pieces and join them together into the final completed piece.

In the 1950’s and 60’s couture designer Sybil Connolly, whose work was international known and particular popular with the style conscious and wealthy in the USA, incorporated hand made crocheted Irish Lace in many of her designs and was single-handedly responsible for something of a revival of the craft.

Associated with the town of Carrickmacross in Co Monaghan, this style of lace owes its existence to Mrs Grey Porter, a local rector’s wife, who brought some appliqué lace home from her honeymoon in Italy. Later, looking for ways to provide work for women from the impoverished local population she established lace-making classes, initially copying the designs of the Italian pieces.

Other wealthy individuals in the area followed suit and during the famine these provided a very much needed source of income in the area.

The local lace evolved from the Italian style and became very distinctive. The laces is made by first made by attaching fine muslin to a net base, with the main part of design outlined in embroidery on both the muslin and net. The surplus muslin is then cut away, leaving the pattern on the net base.

While many other styles of lace died out in the early 20th century, Carrickmacross lace remained strong, primarily thanks to the St Louis Convent in the town whose pupils continue to be taught the craft right to the present time. Lace makers in the area now produce lace mainly by commission and often for fashion designers. Princess Diana’s wedding dress had sleeves decorated with Carrickmacross lace.

Lace making was introduced to Clones by Cassandra Hand, the wife of a local Church of Ireland rector, again with the purpose of providing work locally. It was initially based on Venetian lace, an embroidered lace, but the method evolved into one of crocheting the very fine threads onto a mesh background. The hooks used were extremely fine – about the size of a small sewing needle.

A characteristic is the use of the ‘Clones Knot, created by turning the hook several times around the thread. This creates a ‘nub’ on the finished work which is characteristic of Clones lace. The proportion of crochet to embroidery can vary quite a bit.

The lace making tradition did not die out in Clones at the start of the 20th century as it did in other places, as late as 1940 local lace makers contributed to the dress worn by Queen Mary during her coronation and Clones lace was used by many linen makers in Northern Ireland to decorate their products. However after the 2nd World War the decline of the Linen industry saw a parallel decline in the fortunes of Clones Lace.

The craft was revived in the late 1980’s and there is now a very active local group of lace makers and regular classes in the area help to ensure its future.”

When the Poor Clare nuns established a convent in Kenmare in 1861, not long after the end of the Irish Famine, they could see that the local people were in dire need of employment. Lace was first made in a workshop at the convent, and at first was typical Irish Crochet lace, but later the fine needlepoint lace that became associated with the area evolved.

Initially this was primarily sold in a local hotel much frequented by wealthy visitors from England and Dublin, who flocked to this fashionable area during the summer. Later it was exported to Paris and London. The lace also became very popular on ecclesiastical gowns and many bishops and cardinals from all over the world commissioned work from the nuns.

Extremely intricate, Kenmare lace is created by first tacking the outline of a design onto two pieces of cloth, one a fine netting, the other a more robust backing cloth. The patterns of the lace are then stitched by working from the tacked on design, but with the stitches attached to the finer cloth only. When the pattern is complete, the tacking stitches are cut and the background cloth falls away leaving the completed lace.

Inishmacsaint is a small townsland in Co Fermanagh where a unique style of lace making flourished during the late 1900’s. The initial lace is made by following an outlined design stitched onto a background cloth overlaid with muslin net onto which the actual lace is embroidered.  In this way it resembles Kenmare Lace.

Once the piece is complete the background cloth is cut away and then additional outlining is sown onto the lace to give a raised effect around the important elements in the design. This outline is created with a thicker thread than the rest of the lace and may even be oversown with fine buttonhole stitching.

Aside from a very few local enthusiasts there is no lace in this style made today and antique examples are rare and very sought after.

One of the earliest known Irish styles, Limerick Lace was from the outset a commercial venture, brought to the area by Charles Walker who established a training centre and workshop in about 1830. By 1850 it had become popular and prized by wealthy and fashionable ladies all over Europe.

It is extremely light and delicate in style, with designs embroidered in tiny stitches onto a very fine mesh backing cloth. Usually the backing mesh was stretched over frames and the stitching applied to the taut fabric, but some was worked without the use of a frame.

Little Limerick lace is made nowadays, but a lot was made in the years between the establishment of the factory and its demise in the early 20th century and antique pieces are still quite widely available.

This is really more embroidery than lace and is almost always worked on linen. In the 19th century, when the linen inductry in Northern Ireland was at its height, a lot of whitework was carried out in Belfast and surrounding areas. It is a style also associated with Mountmellick in Co Laois.

The reason it comes under lace styles is the characteristic drawn thread edgeings used to finish whitework pieces.  The edges were created by drawing threads from the linen base fabric to create a fringr. The remaining threads were then moved and covered with embroidered buttonhole stitches to create a laced edge, usually in a geometric pattern.

There are two common types of machine-made lace.

While there is nothing at all wrong with machine-made lace, and it is certainly a lot more affordable than the hand-made variety, you do need to watch out for people attempting to sell ‘antique hand-made Irish Lace’ which is actually chemically made and stained to look old. It is not a common practice, but be on your guard.

Buy antique lace only from reputable dealers, not at market stalls or street fairs.

Hand-made lace is expensive and good quality antique examples especially so. If a piece seems like a bargain, it would be wise to wonder why.

Several of Ireland’s larger museums will have examples of, and occasionally exhibitions devoted to, Irish Lace. You should certainly be able to see some in the National Museum of Ireland and the Ulster American Folk Park.

Look out for local Craft Fairs or ‘Sales of Work’ as you travel around. These are often used as outlets by individual lace makers whose work is not available for sale otherwise.

The following are some places devoted entirely to lace, with links where we could find websites.

Rosemary Cathcart, owner of this private collection, has assembled a stunning array of more than 400 exhibits here, covering just about every style of Irish Lace, as well as Wedding Dresses and Veils, Shawls, Parasols, Collars and Jackets and many other items either made from lace or incorporating lace in their design. A shop at the museum sells antique Irish lace and linen.

Close to the tourist office in the town of Kenmare this small shop has an interesting exhibition of old lace and also sells the work of local lace makers.

Alongside the tourist office here there is an exhibition of the Clones style of lace making along, both old and new, with some items made by local lace makers for sale.

Aran Stitches and their Meanings

While Ireland is a safe country to visit and most tourists have no problems, it …

Emergency Contacts for Visitors to Ireland

When something goes wrong in a foreign country, it's easy to panic.

Since the introduction of the Euro, Ireland has shared a currency with many …