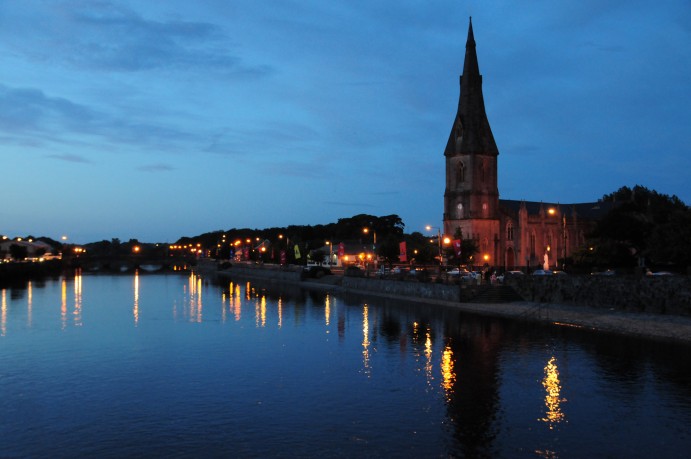 Ballina is surrounded by some of the best fishing in Ireland – the surrounding area abounds in lakes and River Moy, a renowned salmon fishery, flows through the town.

The sight of anglers on the town’s bridges or standing dressed in waders in the river itself is a commonplace.

What to see in Ballina

If you are passing through take a few moments to walk to the back of the railway station, to see the Dolmen of the Four Maols, which is actually a Kist, and which dates back to the Bronze age. It is said to be the resting place of four brothers who according to legend murdered their master and were later executed.

Close to the town, Belleek Forest is a very popular place with walkers.

There are also two abbeys nearby: the 15th century Franciscan Rosserk Abbey whose structure and layout is well enough preserved to allow a good glimpse into the lives of monks at that time, and which has some particularly well preserved early windows, and Moyne Abbey, built around the same time also by Franciscan monks, but in rather poorer condition.

Have you something to add about "Ballina, Co Mayo"?