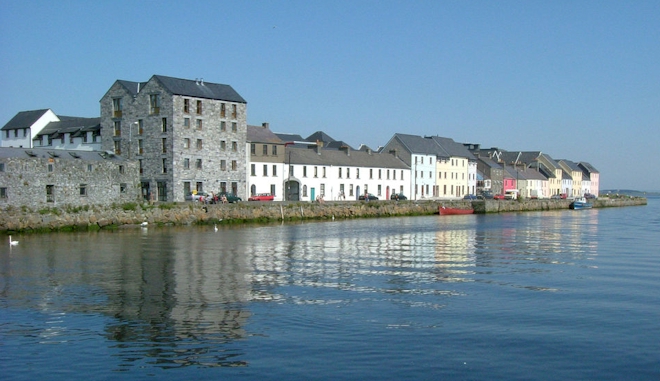 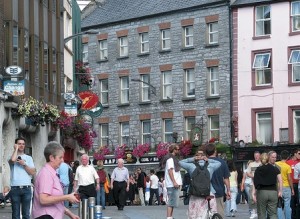 Galway is known as “the City of the Tribes”, a reference to the fourteen merchant families who dominated the city between the 14th and 17th centuries and built it into a leading centre of trade and shipping in Europe.

This golden period in the city’s history came to an end abruptly in 1691 when the city backed the wrong horse, throwing its support behind King James II in his fight against his rival for the throne, William of Orange.

When William sealed his victory at the Battle of Aughrim he lost no time in replacing the landowners and merchants of Galway with others loyal to him. Galway’s decline was immediate, and lasted until the latter part of the 20th century.

Now it is a booming place again, a lively University city with excellent shopping, a rich cultural life and a very vibrant social scene.

What to see in Galway 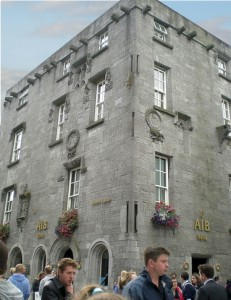 The city centre is very small, easily walked in under an hour, and a pleasant walk it is too – print out this itinerary for a walking tour of the city to get you started, but one of the pleasures of Galway is lingering or detouring as the mood take you.

Eyre Square in the heart of the city has undergone extensive renovations in recent years, but lost some of its soul in the process and is now a fairly banal urban park. Worth seeing are Lynch’s Castle, now a bank but once home to one of the foremost of the city’s tribes, and the 14th century church of St. Nicholas of Myra.

Galway Cathedral is a modern building mostly constructed from local materials and contains some fine examples of contemporary religious art in the form of statues, mosaics and wonderful stained glass windows.

The weekly Galway Market which takes place on Saturdays outside the church comprises mainly of food stalls, but there are some local craftspeople there also and its good for finding unusual souvenirs of your trip.

Basing yourself in Galway for a couple of nights works into a tour of Ireland very well. You can venture out of the city for a day tour of Connemara or of the Burren, and return to Galway to enjoy the night life. By night the place comes alive, with numerous bars and restaurants, and the revelry regularly spilling out into the streets. 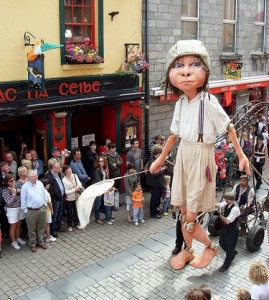 Macnas on parade by Barnacles Hostels

If Ireland is a land of festivals then Galway is its capital. There is one major festival or another on here pretty much constantly throughout the Summer.

When Galway parties there is no missing it – lots of events happen on the street and you’ll find them without even having to look. Among the best are the parades and spectacles created by Macnas, an innovative street theatre company based in Galway who have had an international influence.

The world-renowned Galway based Druid Theatre Company has been the recipient of numerous awards over the years, including a number of Tony awards, and getting along to one of their productions, if there is one running, is highly recommended.

Have you something to add about "Galway City"?